Live Event! 20 Years of Celebrating You [the administrative profession]

Join Nancy Fraze, Reporter In The Field, for a taste of the Annual Conference for Administrative Excellence. This blog was originally posted at www.OfficeDynamicsConference.com.

After a Wellness Breakfast, we gathered in the meeting room. A video  montage played, with Joan explaining how the Conference for Administrative Excellence began 20 years ago. We heard about the first conference, which had 16 attendees from 6 companies, and also about the conference that took place during a Hurricane! (They were all okay and things went well.) We saw many hairstyles and fashion trends in Joan’s photos from the conferences throughout the years.

Joan came up on stage and began to discuss 20 Years Celebrating You & Your Profession. In 1997, the key theme was Building a 21st Century Administrative Staff and back then, Fortune magazine was quoted as saying “where have all the secretaries gone?” Titles changed and duties changed. Image shifted to challenge, value and overall satisfaction.

In 1999, Sailing Into the New Millennium: Charting Your Course to Peak Performance discussed anticipation of the millennium. People worried about Y2K and whether everything in a computer would stop working at the stroke of midnight, January 1, 2000. The focus in those days was on administrative teams. They were concerned about leadership of a team (having that vision) and how to build peak performance, i.e., how to be a star at work. And yes, this was the year that Hurricane Floyd stared them straight in the eye! Everyone was just fine although the hotel was mostly deserted other than just their group.

Skipping to 2001, the conference centered on Don’t Gamble on Leading Your Team: Help Your Organization Maintain a Competitive Edge in the New Economy and was hosted in Las Vegas, NV. The conference emphasis was on thriving during the economic slowdown. Joan discussed that business was a “game” and as such, all organizations were after the big victory – every employee must play their game well in order to create a win for the organization.

In 2003, Opening the Airwaves to Communication was hosted by The Boeing Company in Long Beach, CA and was built around “human moments.” They discussed why image matters; how to dress to flatter your unique image, how to dress appropriately for your environment, dressing consistently with your content, dressing with good taste. “Life begins at the end of your comfort zone,” Joan told us. William Thourlby quote: “Your appearance is truly the one factor you can control. If you package yourself to manage the impression you want to make on others, then their positive reinforcement will, in time, make you the person you want to be.”

In 2004, they discussed It’s All About Energy, hosted by Memphis Light Gas & Water in Memphis, TN. They talked about mental energy (what you think is what you live); physical energy (energize your life); team energy (walking your talk); leadership energy (creating a culture of cooperation and respect; personal energy (internal drive, because motivation is an inside job!) Joan noted that by 2013, all of these have grown in importance in the administrative world.

In 2006, Get Motivated! Striving for Administrative Excellence to Energize: Your Career, Your Peers, and Your Workplace hosted by Xilinx, in San Jose, CA. They discussed that excellence is subjective and motivation is internally generated. Joan quoted Gary Rogers, Chairman of Dreyer’s Grand Ice Cream: “Maintin a Day One Attitude.” They examined how to stretch and challenge yourself, and embrace an attitude of commitment by committing to something at work, whether a team or in streamlining a process. They also discussed giving your best performance at work in every project and in all interactions, and be hungry to learn, and surrounding yourself with motivated people.

In 2008, Sail to Success! Charting a Course to Administrative Stardom, hosted by Office Dynamics in San Diego, CA, where Joan shared a keynote titled, Realizing Your Full Potential: Venturing into High Seas. She discussed that the high seas are where we have the opportunity to grow and be adventurers. Adventurers will reach out to people, use creativity, notice things not seen in calm waters, muster up strength you did not know you had, do things you never imagined, admit you are not super human, be invigorated, and display courage. “Hard times have built our character,” Joan stated. We display courage even when we are scared inside.

In 2009, Adminology: the Art & Science of Leveraging Your Time & Talents to Impact the Bottom Line, hosted by Office Dynamics in Las Vegas, NV introduced everyone to Adminiology and the art and science behind doing an outstanding job as an administrative or executive assistant.

In 2010, Adminology: Professional Expertise for the New Decade … and Beyond!, hosted by Office Dynamics in Las Vegas, NV, was themed on leadership, competencies necessary in the next 10 years, and road maps to success. Joan shared about John Maxwell’s A Life of Significance vs. Success , and how significance opens our eyes and activities to seeing the bigger picture and creates wider significance than success can do alone.

In 2011, The Path Forward; Adding Value Every Day in Las Vegas, NV, discussed stepping stones of Purposed, Engaged, Energized & Fulfilled, Strategic, Growth and Success, Stir Up the Profession, Create, and Be Creative. Importantly, the team building event was the collaboration activity that later birthed the book, Who Took My Pen … Again? authored by Joan Burge, Nancy Fraze and Jasmine Freeman.

In 2012, Be BOLD: Mastering Exceptional Leadership One BOLD Step at a Time, in Las Vegas, NV debuted the 5 Life Pillars: Career, Family, Finance, Spirituality and Wellness; BOLD, Leading yourself, and the debut of Joan’s newest book, written for women of every age and stage of life: Give Yourself Permission to Life a BIG Life.

And that brought us up to the present, 2013. Joan told us, “Don’t take life for granted. It goes by really fast.” She talked about her beloved husband, Dave, who had shared and supported her on the amazing Office Dynamics journey and vision, while fighting pancreatic cancer for five years, until his untimely passing in 2011.

Joan Burge began as an administrative assistant and worked for many years into increasing responsibilities, from executive assistant to eventually forming her own company and becoming founder and CEO of Office Dynamics International.

It was a great retrospective on the Rock Star of the administrative world. “Only Joan is Joan” as they say! 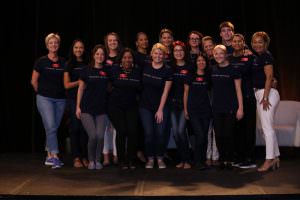 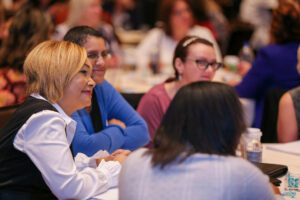 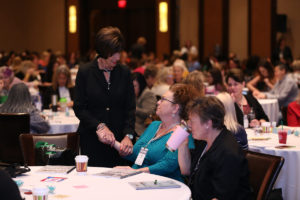 As I sit at my desk on June 1, 2021, I seriously ponder why a person should or would attend an in-person conference. After all, it is so much cheaper to attend a virtual conference or training event. It certainly